THE SOUTH AFRICAN 7.62mm BREN LIGHT MACHINE GUN
The History of the BREN LMG in South African Service is a long one and can be considered in two key phases that of the service of the 'standard' .303" 'British' calibre Arm (7.7x56R), and that of the large number of these Arms subsequently converted to 7.62mm NATO. (7.62x51) by the South African Armaments industry.
A full account of the introduction and service of the .303 Arms is deserving of its own independent record and this page serves to present the known history and detail of the South African converted 7.62mm BREN Arm, as is currently known.
A History of any of the 'unique to South Africa' Arms, whether modified, converted or wholly produced in this Country is, by nature, unofficial and sketchy due to a lack of understanding and co-operation of those organisations within the South African Services, Armaments and Engineering Sectors, who are believed to hold much of the information and supporting documentation relating to South African Arms and who singularly fail to recognise or respond to Researchers of this particular field.
The South African Conversation: 7.62mm BREN LMG:
In the early 1970's and at about the time the conversion program of the Vickers MMG came to an end, Lyttleton Engineering Works, or 'LIW", the Small Arms subsidiary of Armscor, the then State Armaments Corporation, began the conversion program of some 8,000 BREN Guns of various differing Marks, from its native .303" Brt. calibre to the then more common and appropriate Service Round; 7.62mm NATO, on behalf of the then South African Defence Force.
The conversion program was highly organised involving a full complement of Mechanical Engineers and Designers, Metallurgists, Machinists and other necessary skills to design, document and effect this conversion on a 'production line' process.
It is not know to what extent the British Conversion of the BREN to 7.62mm, the British converted 7.62 L4A1 Bren, influenced the South African conversion, but a comparison of the two Arms immediately show the South African conversion to be less complicated and consisting of:
1. Barrel: - A manufactured from new 7.62mm Barrel, fitted with recovered Handle assembly, Gas bleed assembly and Front Sight assembly, fitted with a standard 22mm Flash hider assembly consistent with the South African produced FAL or R1 Rifle, minus Grenade retaining spring clip.
Note that very early South African produced 7.62mm BREN Barrels retained the typical funnel shaped flash hiders of the standard .303" BREN.
The Breech dimension of the 7.62mm Barrel is longer than for the standard .303" Barrel as a result of the Breech Block Face being machined away in the conversion process. (see Breech Block).
After fitting, the Barrel would be hand stamped marked with the existing Serial Number of the Receiver to which it was matched, with the Spare Barrel being marked with this number, followed by 'S', the lettering being approximately 5mm high.
All Barrels were marked: 7.62mm in a similar fashion.
2. Breech Block: - The existing Breech Block was modified to accommodate the rimless 7.62mm Cartridge by having the vertical face of the Block machined away, reducing the depth of the cartridge pocket within the Breech Face.
The existing Firing Pin assembly was retained and the protrusion of the Pin corrected by hand to suit the 7.62mm cartridge.
The Ejector Claw was changed to a new made unit specifically designed to accommodate the rimless round, retaining the standard spring and guide assembly. This Claw will be found to be marked: '7.62' by hand with electric pencil.
3. The Magazine Aperture: Was slightly machined out to accept a metric size Magazine, which in the case of the South African conversion appears as a 30 round version of a standard FN FAL or R1 straight, pressed metal, Magazine.
Note: Although these 30 rnd magazines will properly fit and initially function with the FAL or R1 Rifles, they are specifically designed to feed downward with gravity assist for the BREN and will not feed the contents of the entire magazine upward if used on the FAL / R1.
4. The Magazine Release Catch: and assembly was replaced with a new made assembly, modified to suit the 30 rnd Magazine.

5. The Rear Sight Assembly: was modified and calibrated to suit the 7.62mm cartridge, usually being calibrated to a maximum range of 2,000 Meters. It appears existing sight vernier was machined clean of its existing markings and new markings applied assuming a factor or x100. All other parts appear to be retained, with the re-calibrated vernier being marked '7.62'.
The Process:
The conversion process consisted of a number of "operators' or 'fitters', each working at a specific Bench, receiving a complete Arm for conversion after the appropriate control procedures.
Each Arm was extensively examined for defect or faults that would affect the operation or finish of the conversion and any found where rectified at this point.
The Arm was then stripped with all components being placed into specific trays or plastic bags, fundamentally designated for;
- Reuse,
- Reuse after modification, (which usually took place in another part of the Factory), and
- Replacement with new, modified parts.
All trays and bags where marked to the original Receiver number, ensuring all parts stayed together for a particular Arm.
At this point, the marking; '7.62mm' in 10mm high numerals was applied to the Left Hand Side of the Receiver Body and the appropriate trays or bags collected for processing elsewhere in the facility.
In all cases new and used metal parts were Phosphate treated before use or re-use.
On completion of processing elsewhere in the facility, which included the machining and finishing of all original parts to be modified, all components where returned to the Operator for re-assembly into a complete, working Arm along with the require new parts which were drawn from production Stores.
It is interesting to note that the upper body section of a ZGB33, Serial No. 65, has been discovered having been marked and treated as per the conversion process, but having been rejected and scrapped due incompatibilities in the area of barrel bearing, locking nut, sight, butt etc.
Final assembly included the marking of the Barrels as previously described, electric pencil marking of the Ejector Claw, the Bipod Support Collar of the lower body assembly and the gauging and checking of all critical tolerances, inclusive of Headspace, before the Arm was moved to another area for Test Fire, Accuracy and Grouping and a final check.
From this point, not much further is know about the process and it is expected that the Arms where cleaned, treated and packed for storage and shipping, prior to being returned to the Defence Force for use.
Comment has been made by former members of the conversion engineering team as to the resulting accuracy of the converted Guns, which produced Arms of greatly varying accuracy.

It is true to say that the finally converted and accepted Arms showed an acceptable level of accuracy, but never reached the inherent level of accuracy the .303 BREN was coveted for.
The 7.62mm BREN saw service with the South African Army for only a short period, many of the 'Commando' or 'Territorial' Units training with them, as did many of the National Service Units.
It is know that that the vast majority of 7.62mm BREN Guns were withdrawn from South Africa Service in the mid 1970's and supplied to the them Rhodesian Security Forces, the South Africans continuing with the FN MAG 58 LMG and having also effected the conversion of a number of Browning 1919A Machine Guns to 7.62mm.
In both the South African and Rhodesian Service Units, the converted BREN was not favoured as an active service weapon, due to its inherently slow rate of fire, small magazine capacity and unduly high weight.
This assured that these Arms saw relatively little active service, compared to its MAG counterpart and were mostly relegated to fixed protection and some patrol Vehicle applications.
Uncertainty remains to this day as to the number of BREN's finally converted by South Africa, supplied to Rhodesia, or indeed, how many the Rhodesians may have converted, (either themselves or by contract with South African Engineering companies), as it is know that the conversion process documentation and drawings were provided to Rhodesia in the mid 1970's.
The 7.62mm BREN and associated components pictured on this page is typical of the BREN's which were initially converted in South African and finally saw service in Rhodesia.
Richard This was a Enfield manufactured mk1 Bren Something I spotted recently as the owner did not know what they were. SA manufactured Synthetic Bren gun hand grips, one for the Mk1 and other Mk2 bren guns. Only a handfull are known to have survived the ravages of time, from Rhodesia, as the South African ones were destroyed during Ops Mouflon. According to the records, the remaining 3637 guns in SANDF inventory were destroyed. 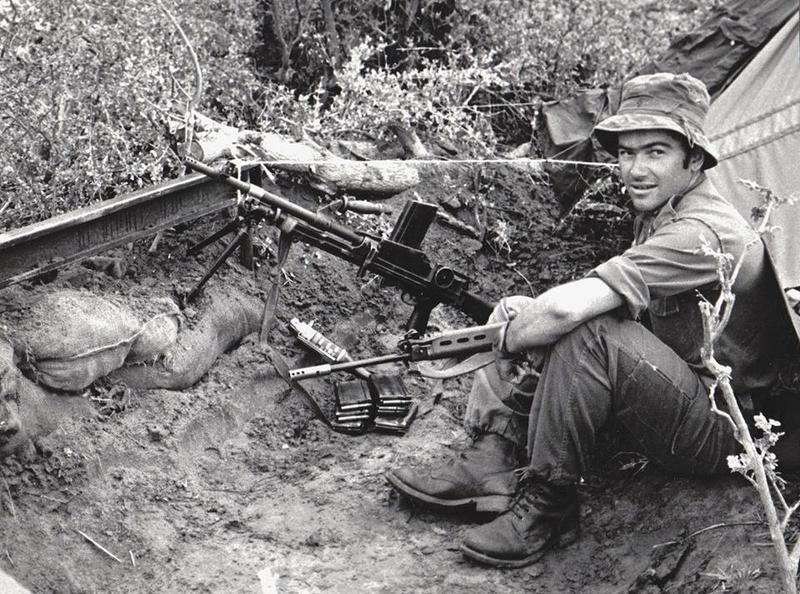 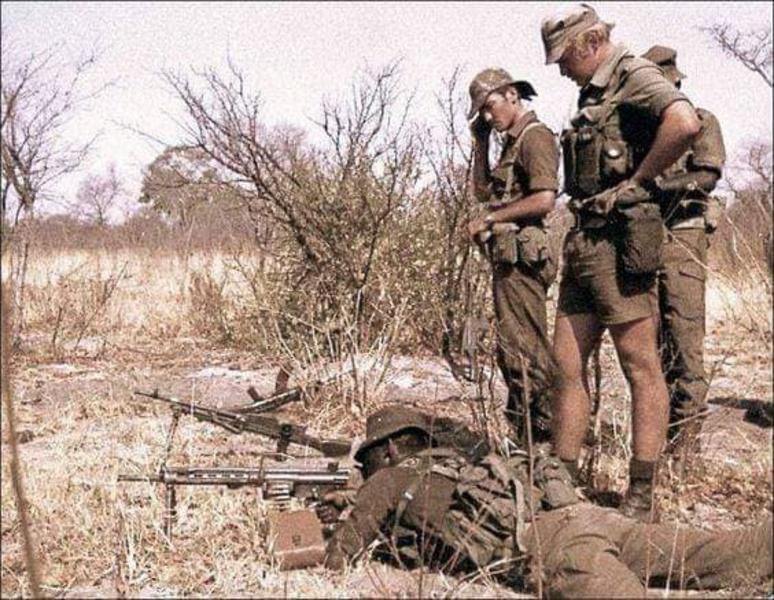 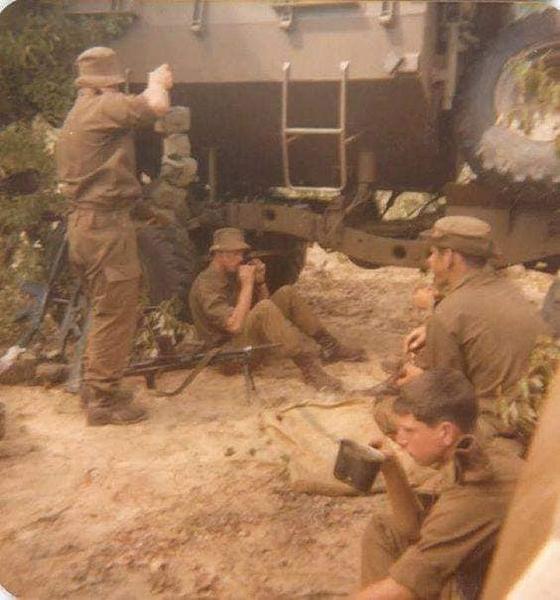 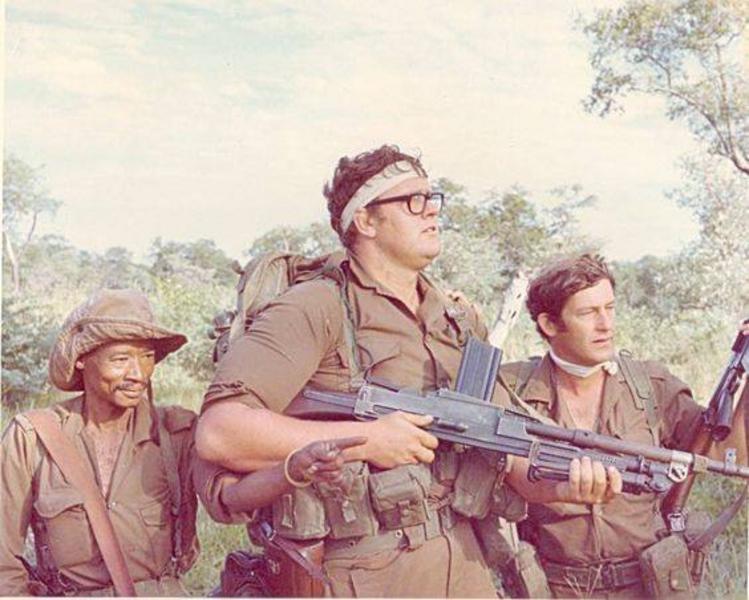 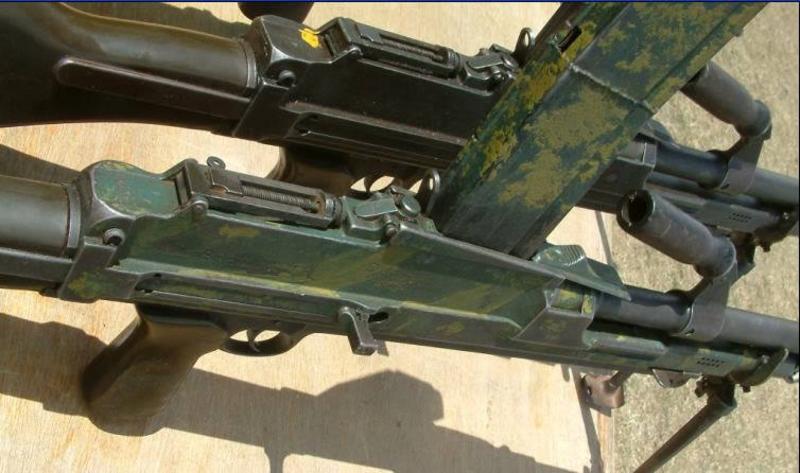 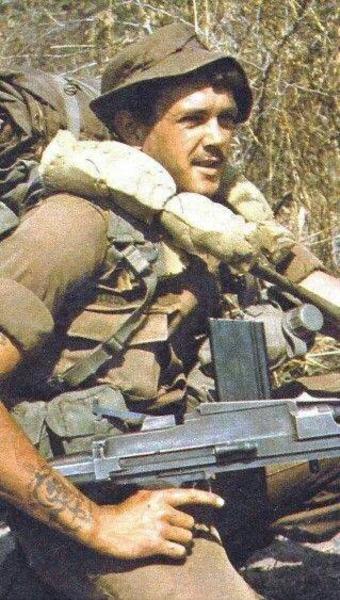 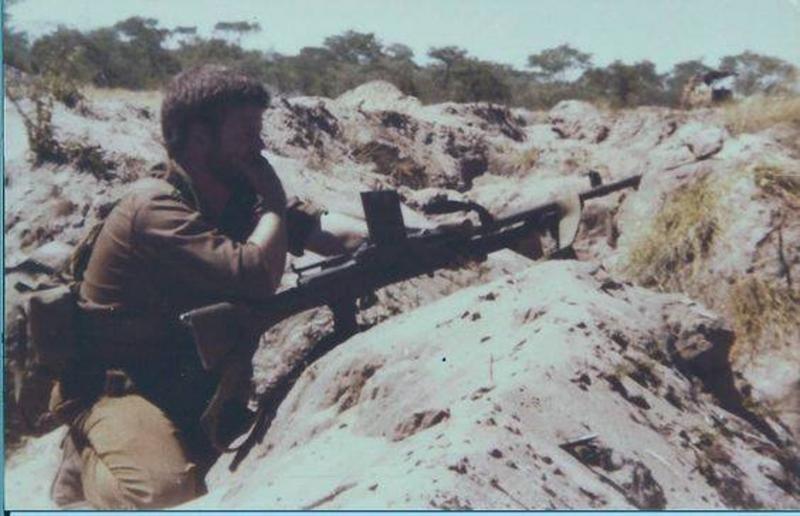 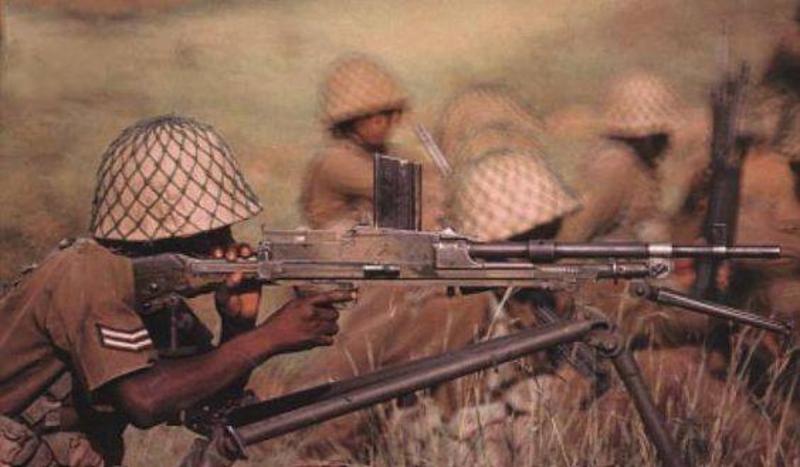 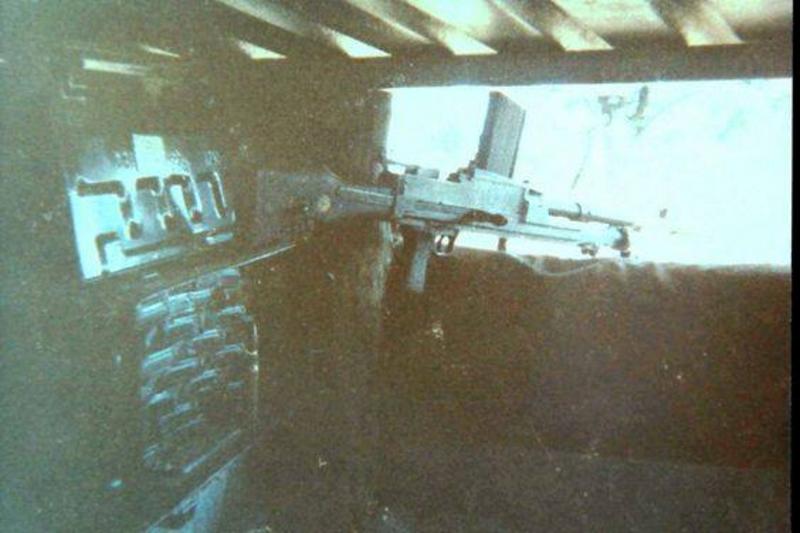 The extended Rhodesian Bren gun magazine, made by welding two magazines together and silver soldering the springs together 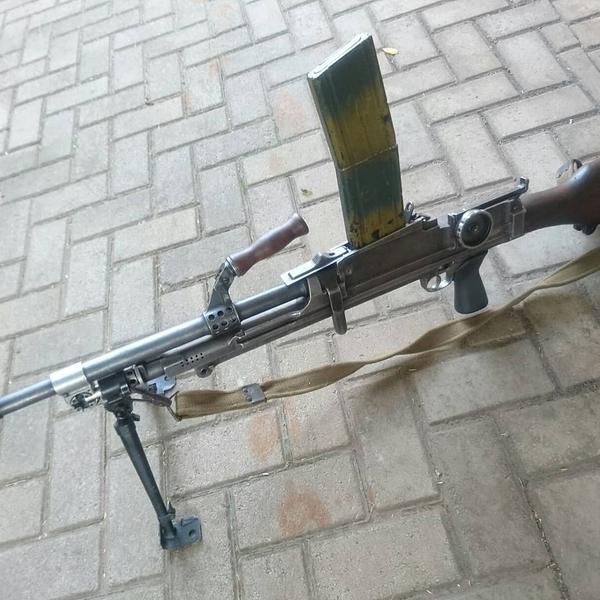